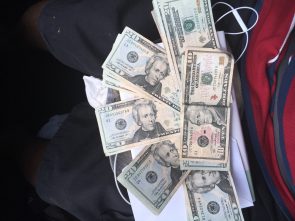 The word of the day is, “Money”  You know that thing that is often called the root of all evil.  The thing that you can’t live without. The thing that stresses you out when you don’t have it and worries you about how you are going to keep it.

The thing that some people will do any and everything to get, and even more to hold on to. That thing that the top 1% have the most of and not enough people have enough of.

That thing that defines to some people who they are and what they are. Our society tends to look-up and worships people who possess a lot of that thing, without truly knowing how they obtained that thing. There are people who do a lot to hide how they got that “THING”. That thing that places a value on people; even though we hear more and more that some of those have not necessarily used good values to acquire that thing.

Money is not the root of all evil; it is what some people will do to get it that can result in evil behavior.

That thing that is so hard to get, but very easy to get rid of. They say that money doesn’t last, but the good character has staying power. If only your character could pay the bills.

If only that “thing” was equally distributed. If only that thing would go to those who need it most.

That thing is often mismanaged, abused, and sometimes misused. That thing can determine our health and access to healthcare. The thing determines where we live and how we live…and even if we live.

That thing can determine who runs the country and even how the country is run. The people who control that thing tend to have more control.

Don’t allow yourself to end up in a position where that thing is controlling you.

Color Me Naturally for Holiday Festivities

See How She Does It!