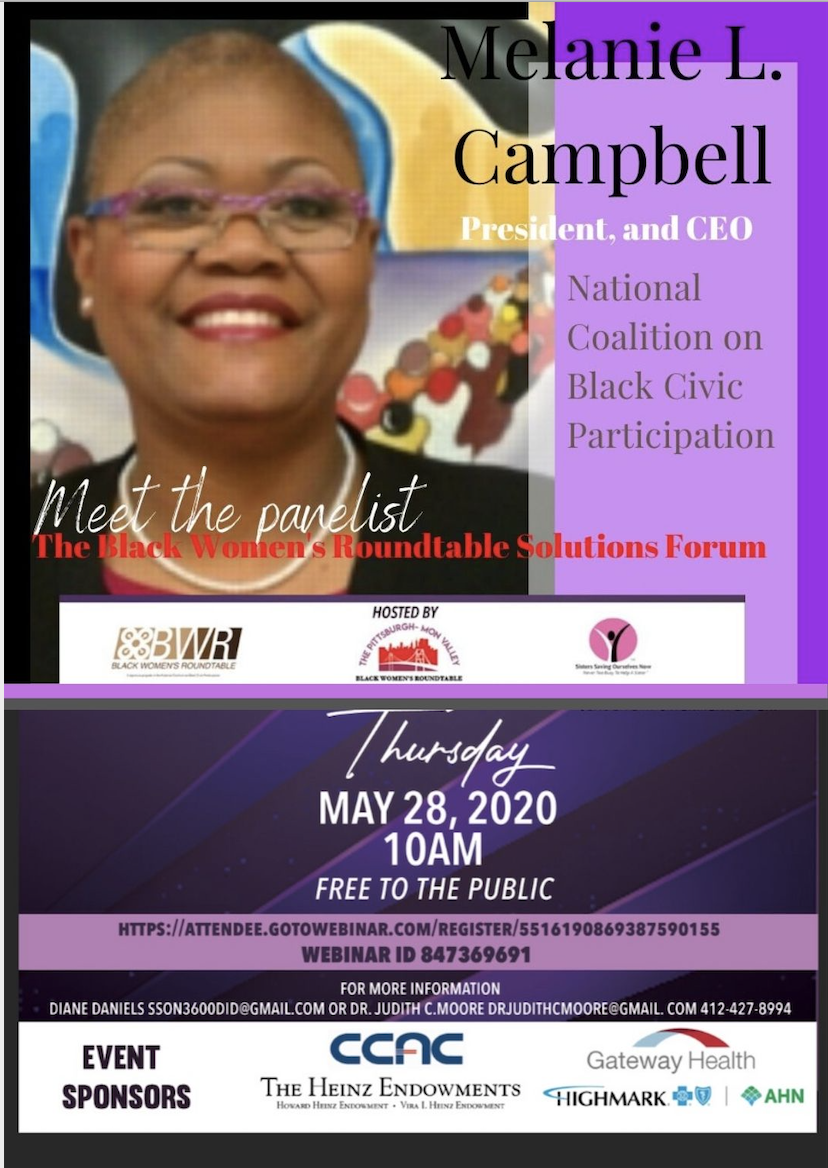 Known for her unique ability to build powerful coalitions that bring diverse people together for the common good, Melanie L. Campbell, President, and CEO of the National Coalition on Black Civic Participation and convener of the Black Women’s Roundtable Public Policy Network, has fought for civil, youth and women’s rights for over 20 years. As a veteran at leading, planning, and managing highly successful multi-million dollar civic engagement, census, and issue-based campaigns, Campbell is recognized as one of the hardest working leaders in the social justice movement. Her leadership played a pivotal role in the 2012 election where Black people turned out at a higher rate than Whites and Black women surpassed everyone for the first time in history.

In her role as convener of the Black Women’s Roundtable, Campbell brings together coalitions of women from diverse races, ethnicity’s and backgrounds to advocate for policies to advance women. Most recently, she spearheaded BWR’s efforts to promote Black women’s appointments to high-level positions in the federal government. BWR was instrumental in encouraging the appointment of several African Americans to key positions in the Obama Administration.

A nationally recognized expert in civic engagement, election reform, and coalition building, successful projects enacted under her leadership include the Unity Voter Empowerment Campaign, Unity Diaspora Coalition Census 2010 Campaign, and the Rebuild Hope NOW Coalition to assist survivors of Hurricanes Katrina and Rita in rebuilding their lives in the Gulf Coast. One of her most rewarding accomplishments at the National Coalition has been creating an innovative, youth-focused leadership development program, Black Youth Vote! (BYV), for which she received the Congressional Black Caucus Foundation’s Emerging Leaders Legacy Award.

Campbell is a contributing writer in the 2008 National Urban League State of Black America, Election Reform: Protecting Our Vote from the Enemy Who Never Sleeps; 2006 Harvard University Journal on African Americans in Public Policy, “A Nation Exposed: Rebuilding African American Communities”, article on “Right of Return Means Access to the Ballot, Access to Neighborhoods, and Access to Economic Opportunity‟. She also contributed to the publication’s 2004 edition, “Politics & Progress: A Presidential Platform for 2004.”Melanie will serve as a panelist for the Black Women’s Roundtable Solutions Forum. See flyer below and register today.

The former director of the Mayor’s Offices of Youth Services for the late Maynard Jackson in Atlanta holds a B.A. in Business Administration and Finance from Clark Atlanta University. She is certified in executive non-profit management by the Georgetown University Public Policy Institute Executive Program and was a resident fellow at the John F. Kennedy School of Government’s Institute of Politics at Harvard University in 2003.

Melanie will serve as a panelist for the Black Women’s Roundtable Solutions Forum. See flyer below and register today.