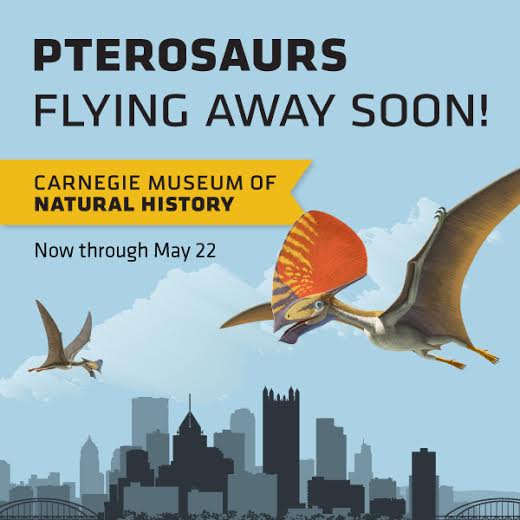 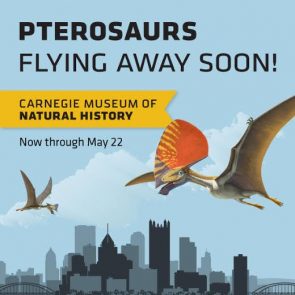 They flew with their fingers. They walked on their wings. Some were gigantic, while others could fit in the palm of a hand. Millions of years ago, the skies were ruled by pterosaurs, the first animals with backbones to fly under their own power. In the new exhibit Pterosaurs: Flight in the Age of Dinosaurs, rare fossils, life-size models, and hands-on interactives bring these ancient animals to life.

Pterosaurs were not birds or dinosaurs. They were reptiles and the first vertebrates to fly. They flew not by gliding through the air but by flapping their wings to travel. Pterosaurs ranged from as large as a plane to as small as a bird. Pterosaur bones were thin-walled and hollow. One of their most intriguing features was their head crests. Similar to a rooster’s comb, Pterosaur head crests were a prominent feature with an amazing range of shapes and sizes. They lived more than 150 million years ago in the age of dinosaurs.

Fly Like a Pterosaur
Visitors can “pilot” a flying pterosaur over a prehistoric landscape in a whole-body interactive exhibit that uses motion-sensing technology.

Crest Gallery
A gallery display illustrates the incredible variety of pterosaur crests – from a dagger-shaped blade that juts from the head to a giant, sail-like extension.

Virtual Wind Tunnel
Experiment with the principles of pterosaur aerodynamics! This interactive virtual wind tunnel will respond to the movements of your hands.

Scaphognathus fossil cast
Scaphognathus was a pterosaur that lived in what is now Germany during the Late Jurassic about 150 million years ago. This fossil preserves an incomplete adult with a 3-foot wingspan (0.9 m) and was recovered from the Solnhofen strata near Eichstatt, Germany.

Learn more and get your tickets at here

On the Cover: About that Dress!